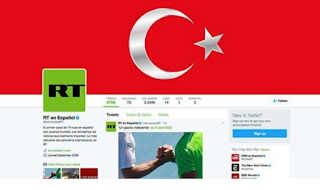 The messages include a swastika, the terms “Nazi Germany” and “Nazi Holland” and the sentence: “This is a little Ottoman slap, we’ll see you on April 16,” referendum date in Turkey

Several verified Twitter accounts, including those of Amnesty International, the BBC, the French Ministry of Economy, Unicef, Forbes, Russia Today in Spanish, the Asus account in Spain or the German newspaper Die Welt, were pirated on Wednesday with messages in Turkish comparing Holland and Germany with the Nazi regime.

“Nazi Germany #Holanda Nazis Here’s a little Ottoman slap for you. #We see you on April 16. Do you want to know what I wrote? Learn Turkish,” read a message in Turkish that also appeared in the accounts of Javi Martinez, who plays at Bayern Munich, and German extenist Boris Becker, among others.

The message was accompanied by a video with excerpts from a speech by Turkish President Recep Tayyip Erdogan, who approved a constitutional review to reinforce his powers that will be put to a referendum on April 16.

Twitter confirmed having suffered a major computer attack. “We are aware of the problem that affects several accounts,” said a spokesperson for the social network, adding that they “quickly” located the source of the attack that comes from an “application.” “We have withdrawn his permits immediately,” added the spokesman, who assured that “no other account has been affected.”

The application in question, Twitter Counter, launched for its part an investigation into the attack of which it was a victim and that allowed this massive hacking, as indicated to the AFP its president, Omer Ginor.

The French Ministry of Economy confirmed that its Twitter account was pirated. “We have solved the problem,” the ministry said, without giving further details.

For its part, BBC News North America posted a message on Twitter in which it noted that it “temporarily lost control” of its account in the social network.

Ankara is in full dispute with several European countries, led by Germany and the Netherlands, which banned Turkish ministers from campaigning among the Turkish diaspora in favor of next month’s referendum.

On Monday a similar incident took place in the Netherlands, where pirates, supposedly Turks, hijacked several websites, including the Dutch War Museum and a Christian volunteer organization, replacing its content with messages in favor of Erdogan.

In that case, the pirates signed their action with the phrase “We are Ottomans, we are Turkey, we are ‘akinci'”, in reference to a type of Ottoman horsemen famous for their raids, a name that also uses a Turkish terrorist faction of ultranationalist Islamist ideology.